When I was ten-years-old, I pestered my parents into letting me have my first dog. I researched breeds in the library and decided upon a yellow Labrador Retriever. I was in boy heaven when we brought home my new puppy, whom I named, Duke. 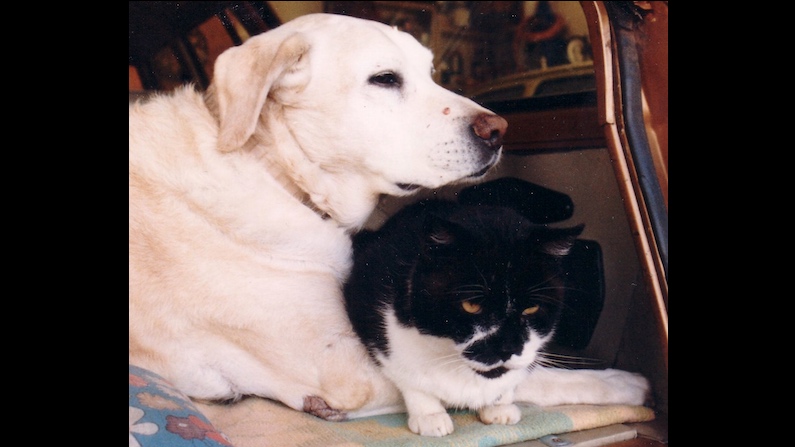 However, by my teenage years, the responsibilities of dog ownership — walks, training, brushing, feeding, washing etc. — had become chores that I increasingly skipped. Duke soon settled into the typical family dog role of furry “furniture”.

About this time, my brother’s cat had a litter of kittens, but before she weaned them, the mother cat was sadly run over. We raised the orphans and kept a black and white one, named Tom, who adopted Duke as his surrogate mother.

At first, Duke complained about the kitten that followed him around, nestled into him when he lay on his mat and used his body as a scratching pole. Duke would look at us imploringly, growl at the kitten and occasionally bark when its sharp nails dug too deeply. But he never snapped at Tom, nor chased him away, and over time Duke came to accept Tom’s attention.

I grew up and left home, as did my brother. Duke and Tom lived on together with my parents until Duke reached the grand old age of 16. My dad buried him in the back garden. When Tom died a short while later, my dad buried him on top of Duke – the family joke is that my dad heard a dog growl, “Not that cat again!”

Duke was a good dog, and the photo of him with Tom brings back fond memories. But it’s also a personal reminder that kids are fickle in their affection and commitment to pets.

If you buy a dog or a cat for a child or as a family pet, then it’s highly likely that you, the parent, will need to take responsibility for it in the short and long term.

N.B. This post first appeared as an article in the Village Voice Eastern-Harbourside in May 2008 and is also published on my blog, RobertFairhead.com. You might like another blog post about my adopted black Lab, Jet, who’s found his Forever Home.